Q&A With Mr. Biffo / Paul Rose! (Plugging His Book, But Being Funny Too) 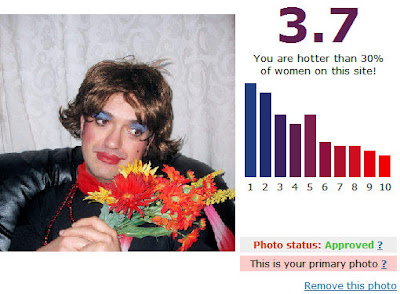 Readers of the funnier-than-this-blog (not hard) and updated-more-than-this-blog (really not hard) Mr. Biffo’s Blog (formerly Biffovision) might have noticed one or two references to the new book Confessions Of A Chatroom Freak by the former Digitiser and only-readable-page-in-Edge guy. In the interests of good old-fashioned promotion, he agreed to grant us a Q&A about his sexual interests and darkest perversions. And a bit about the book.


You've written a book. Tell us all about it. Does it have some nice, smooth varnish on the front?

The entire cover is very smooth, and the overall dimensions are slightly larger than you – or indeed I – would perhaps expect them to be for a book of this sort. Tie it to a broom handle, and it makes for a very effective cudgel. And I should know: I’ve just used it to pressgang four or five people! The book is a series of genuine transcripts of conversations between my feminine alter-ego, LoopyLisa21f, and a series of unwitting online suitors. It’s probably slightly longer than it should’ve been, but at least you get your money’s worth. And hey – it’s not a novel, and therefore not meant to be read all in one go. Idiots. Depending on who you are, you’ll either find it the funniest thing you ever read, or get halfway through and decide that’s more than enough to write a negative review on Amazon. Not that I ever did that when I used to review video games for a living, of course. I played them all through to the end. Ahem.

Pretending to be someone you're not's a bit weird, isn't it? All this hiding behind personas who aren't really you, like a washed-up games journo who slags off everyone because HE HATES THE WORLD AND… ahem, sorry… so why did you go with "LoopyLisa" and her surreal personality?

I dunno, really. I didn’t think about it a great deal. Lisa just sort of happened. She was always 21, always a school teacher, and always had a father who abused her in a variety of amusing ways. Actually, there are elements of her personality that are based upon someone I used to know, but that’s all I’m saying on that (and with that every single person who ever met me feels a sudden pang of paranoia…). Yes, it was probably a weird thing to start doing initially, but hey – it was for a book, guy! If I did it for fun you’d have cause to get concerned. Anyway, hasn’t everyone pretended to be someone they’re not at some point? And when I say “pretended to be someone they’re not” I specifically mean “inverted their genitals to pretend to be someone of the opposite sex, and inexplicably started crawling around in their front garden”.

Even if you go out and win the Nobel Peace Prize, you'll always be remembered as "that guy what used to do Digitiser". One of our personal favourite bits of Digi was Phoning Honey, where you would ring up games shops and firms and prank them up good. Is LoopyLisa the new digital frontier version of Phoning Honey?

Yes. Spot on. That was part of the idea behind it: I needed to find a way to get all that pent-up Digi nonsense out of my system. Digitiser was always a stream-of-consciousness – written in an hour every morning, before I went off and did something more productive, such as give myself the runs, or suckle a horse – and for Confessions of a Chatroom Freak I took exactly that approach. It’s all quite liberating, really, especially now that I work in TV, where I’ve constantly got 45 people breathing down my neck, telling me what and how I should be writing. It also means I can go back and read bits, and find them funny because I don’t remember writing them.

Going back to the chatting up of a plethora of chat room weirdos you've done for your book: Now that the conversations they've had with you have been published for the world to see, what are you going to do when one tracks you down and demands you make good on any promises you might have made?

Take him up on it. I am nothing if not dedicated to my art. Actually, I’m not sure I ever promised anything. Part of the book was me talking a load of surreal arse, and seeing how long they’d continue to talk to me.

The TriForce wrote a book. No, really, and Teletext's GameCentral said it was shit. We found a dog-eared copy in Waterstones and thought it was alright. The kind of "alright" where we didn't regret standing there reading it for 10 minutes, but not the kind of "alright" where we were reaching for our wallets afterwards. Do you think your book will break the speed record set by the TriForce's book, and hit bargain bins even sooner (even if that would mean hitting the bargain bins literally before its release)? And do you think Teletext will say your book's shit too?

I can’t see the book being reviewed on GameCentral. Firstly, it has absolutely nothing to do with video games. Secondly, it’s absolutely filthy, and I know from bitter experience that Teletext doesn’t like any hint of filth unless you’ve found some way to sneak it onto their pages. Lastly, Teletext’s senior management hate me, so I wouldn’t for a second imagine that they’d want to publicise my guff. Will it hit the bargain bins quicker than The TriForce book? I hope so: I need to top up my promo copies library.

How does it feel not only being an Official Top 10 "Celebrity" Games Journalist BUT ALSO the sixth least hideous games journalist?

It feels to me like you could’ve chosen a better photo. I absolutely fucking hate that one. ‘Scuse my French.

Who's more attractive – you, or LoopyLisa?

Lisa, by far. She has smoother legs, and a nicer bottom. Mine is all damp, and covered in leaves.

Incredibly, the first few voters when we checked on Paul's picture agreed: 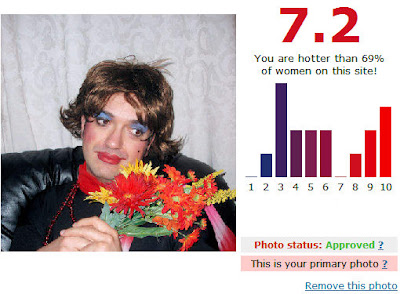 And on that note, is LoopyLisa's resemblance to Russell Brand intentional?

Does she look like Russell Brand? That’s the first I’ve heard of it. That probably means that Russell Brand looks a bit like my mother. Perhaps we’re related. Which would be embarrassing, seeing as we recently had sex with one another (you know: “for television”).

Were there any chats too saucy for the book? TELL ME NOW. IN DETAIL.

I’m not sure. There were some that were too unfunny for the book, and a couple that we edited out because some guy went off on a racist rant that sat uncomfortably alongside the rest of it. I think the sauciest ones are all in there. Some of those chaps really do get quite steamy. And, indeed, seamy.

You look very comfortable in your photographs. Your idea, perchance?

Actually, no. I tried to convince my publisher that we could get a model to pose for the pictures, but the budget wouldn’t stretch to it. My default reaction in any crisis is to reach for the mascara. The original photos I sent to the victims were actually slightly more masculine. The ones in the book are probably slightly too girly. I’d certainly do me. And I have done.

It's an undisputed fact which has been scientifically proven on more than one occasion that 93.7% of people surf the net in their underwear at all times. As you obviously statistically lie within this percentile, did you have your online chats in your underpants, or did you crack out the negligee?

Chatting up perverts and possible paedophiles is undoubtedly one of the best jobs in the world (it is, isn't it? Hmm?), so are you working on a sequel?

My publisher hasn’t asked me to think about a sequel, but I’d very much like to do one. I guess it all depends on how well it sells. I don’t think it’s doing too badly at the moment, but who knows? I think I learned a few lessons, and I’d like to develop the idea in a few different ways, while not losing sight of what makes it good. As I previously mentioned, I do find the process quite liberating. The book won’t be to everyone’s taste, but this sort of abject nonsense never will be. After all, Digitiser was always very divisive. I’d be surprised if anyone who liked Digitiser doesn’t finds Confessions funny. Also: anyone who doesn’t like the book is obviously an Internet pervert himself, and merely looking out for his own.

Did you ever feel yourself getting dragged (hah – "dragged" – you see?) a little too far towards the dark side when you were dedicating so much time towards chatting up freaks? Were you ever, say, halfway through a conversation before realising you had your hand on a nipple?

You mean, did I ever get turned on? Christ, no. There’s nothing quite as sobering – or less arousing – as knowing that the man you’re talking to is masturbating while fantasising about having sex with a female version of yourself. Towards the end I certainly found the whole thing clouding my mood. The first half of the book was written over the space of a couple of years, but making up the remainder of the chats only took a couple of months. That much concentrated exposure to the dank underbelly of the Internet was almost too much to handle. There’s only so much of that a man can stomach before losing all faith in the rest of his gender: it’s like being able to read people’s minds, and I did start to realise that – contrary to popular thinking – people don’t try and pretend to be someone else online. That’s who they really are.

You're a proper, real life TV writer. Do you think there's some way you can bring Confessions Of A Chatroom Freak to TV land?

I don’t know how it’d work on telly. My publisher and I did briefly toy with the possibility of doing some sort of live event – just to prove that I really do these things for real – but I can’t see any way of that happening without entering a legal minefield. I’d be happy to sell the film rights to anyone with a spare million quid to hand. Oh, go on then – fifty quid.

Did you ever have any chats with blokes who were actually Pat Butcher lesbians just pretending to be mentally disturbed wank monkeys?

No, but the opposite did happen. I chatted to one “bi-fem” who I sussed pretty early on was a bloke. Which was quite a surreal situation, when you think about it.

Your hatred of Terry Pratchett is legendary (interesting trivia fact: several games journos who work with his daughter love slagging her off when she's not there). Had you thought of inviting him to a chat with LoopyLisa? Do you think he'd try and work his moves, or huffily whine something about Ankh-Morpork (or whatever) and disconnect?

I don’t hate Terry Pratchett. He was just astonishingly rude to me one time, and I don’t like his stupid books. Admittedly, that’s probably as a consequence of him being rude to me. I’m not sure I’d want to chat with him as LoopyLisa. In fact, I couldn’t think of anything more distressing. Try and picture that: Terry Pratchett tugging himself off during a cybersex session. Ugh. No. I’d never go online again.

If you could chat with any person in the world as LoopyLisa, who would it be?

You, Ramraider. It has always been you…

RAM Raider
A gaming journalist looking from the inside out, wondering why all the joy has been replaced by bollocks...

For The Money Saved Using BitTorrent